L-Carnitine is an amino acid derivative that the body naturally produces. Some like to refer to it as THE nutrient ferry so to speak as it shuttles fatty acids from the blood to the mitochondria, the energy-producing “furnaces” in the cells so that the fatty acids can be used as energy. Essentially, it helps the body turn fat into energy.

While it is a natural substance found in food, it is not considered an essential nutrient because the body can make it from the amino acids lysine and methionine.

Unfortunately, not everyone naturally produces enough of it which is why it is a common supplement used by individuals who are trying to lose weight or doing intense workouts.

WHAT ARE THE BENEFITS OF L-CARNITINE?

L-carnitine is essential for turning fat into energy, functioning as an antioxidant, and supporting the function of the heart and brain.

Benefits of L-Carnitine include:

-Carnitine acts as a transporter for the new free fatty acids that are generated. This helps transport fatty acids through the mitochondrial membranes so they can be oxidized. This transport is called the activation of fatty acids.

-Increase high-intensity workout capacity
-Increase athletic performance
-Prevent oxidative stress that leads to longer long-term health problems such as cardiovascular disease, diabetes, and chronic inflammation-It also improves endurance by inhibiting the build-up of lactic acid, one of the primary causes of fatigue.It has been shown to reduce the accumulation of metabolic wastes during exercise which helps increase workload output during exercise and enhances recovery post-exercise.Human studies indicate that taking acetyl-L-carnitine daily helps reverse the decline in brain function associated with Alzheimer’s and other brain diseases.

Injectable L-Carnitine can be administered both intramuscularly (IM) and subcutaneously (SUBQ) at a recommended dose of 300-500mg per day either first thing fastest state AM or pre-workout. 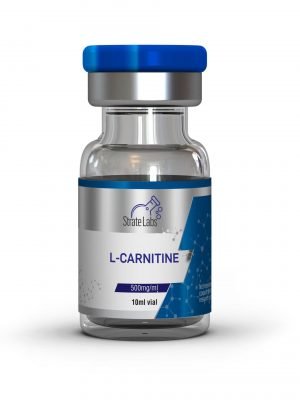 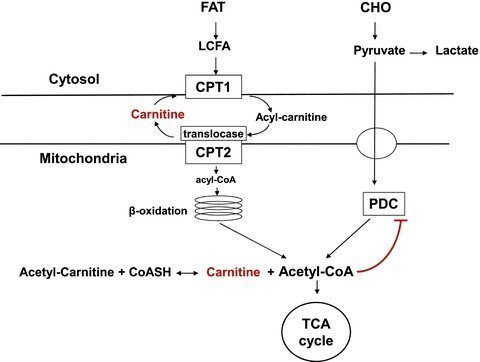 Boosting fat burning with carnitine: an old friend comes out from the shadow

Understanding the regulation of fuel utilization has been a topic of great interest and has practical implications to athletic performance and to prevention of pathophysiological metabolic conditions. The balance between carbohydrates (CHO) and lipids is regulated by a complex system with multi-site feedback and feedforward control as well as interaction between the pathways. Carnitine has a crucial role in lipid oxidation by mediating the translocation of long-chained fatty acids into mitochondria. During the past 30 years, dietary supplementation with carnitine has been widely used in order to enhance lipid oxidation and increase exercise performance. The evidence for an ergogenic effect of carnitine is, however, limited and most studies show no effect of carnitine supplementation on lipid oxidation. This is hardly unexpected since there is hitherto no evidence that muscle carnitine content can be increased by carnitine feeding in healthy men.

In a recent issue of The Journal of Physiology, Wall and colleagues were able to show for the first time that muscle carnitine can be increased in healthy men by dietary carnitine supplementation (Wall et al. 2011). The same research group led by Paul Greenhaff has shown in a previous study that 6 h intravenous infusion with a combination of carnitine and insulin elevated muscle carnitine by 13% (Stephens et al. 2006). The mechanism is probably related to stimulation by insulin of the Na+-coupled transmembrane carnitine transport and is the theoretical foundation for the present study, where carnitine feeding was combined with CHO. Three months of dietary supplementation with a combination of carnitine and CHO had no effect, but after 6 months muscle carnitine content increased by 21%. The necessity of using a very long supplementation period demonstrates the difficulties involved and explains the failure of previous studies with shorter intervention periods.

In this work, they have not only shown increased muscle carnitine but also that this alters muscle metabolism during exercise. Firstly, during low-intensity exercise (50%

) carnitine supplementation resulted in reduced glycogen utilization and reduced activity of the pyruvate dehydrogenase complex (PDC). PDC is a main control point of CHO oxidation and has a complex mode of control including feedback inhibition by the products acetyl-CoA and NADH (Fig. 1). The investigators suggest that the reduced PDC activity is due to a carnitine-mediated increase in lipid-derived acetyl-CoA. Although this explanation is consistent with theoretical models (Randle et al. 1963) the current data give limited experimental support in that the acetyl-carnitine/carnitine ratio, which reflects the acetyl-CoA/CoA ratio, was lower after carnitine supplementation. The carnitine-induced sparing of muscle glycogen is an important finding and is consistent with an increased lipid oxidation. However, an obvious limitation of this study is that there are no measurements of lipid oxidation, which should have been one of the primary outcomes.